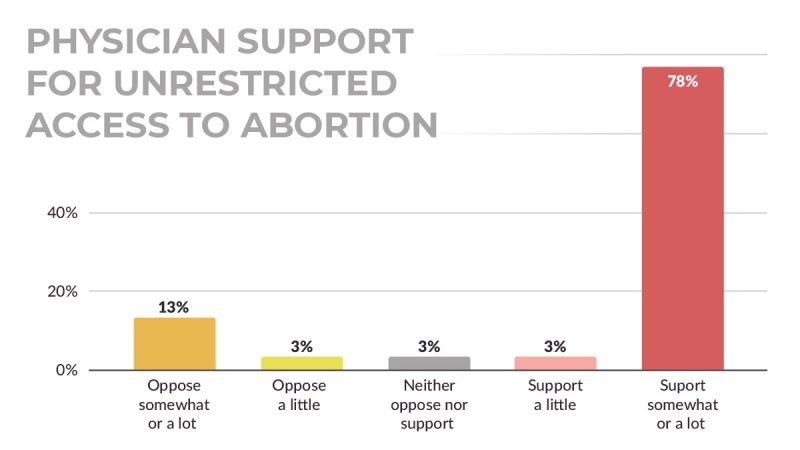 Our recent series of studies here at UW CORE, Collaborative for Reproductive Equity, document overwhelming support of abortion services among faculty physicians at the UW School of Medicine and Public Health. More than three-quarters of doctors surveyed expressed support for abortion access, and more than nine in ten expressed concern about abortion restrictions. We are sharing these findings in the research brief “Physician Support of Unrestricted Abortion Services in Wisconsin.”

The new research is part of a larger project that assessed abortion-related attitudes, practices, and perceptions among physicians of all specialties within a Wisconsin-based teaching hospital. The researchers surveyed 913 physicians who represent more than 20 medical specialties. The survey results showed:

CORE’s research suggests that Wisconsin’s abortion restrictions, which include (but are not limited to) a mandatory 24-hour waiting period, multiple clinically unnecessary constraints on medication abortion services, and the criminalization of abortion if Roe v. Wade is overturned, are not in line with physician’s professional perspectives. While doctors’ personal beliefs vary, the majority of doctors surveyed report that current abortion restrictions worsen patient care and that women’s health will decline further if abortion becomes illegal in our state.